Spartan-Harsey Folder “SHF” The Spartan-Harsey Folder or “SHF” is Spartan Blades first folder collaboration with world renowned knife maker, William "Bill" Harsey Jr. The SHF was produced with the combined goal of creating a sturdy folding knife that could be used for a variety of tasks. This blade can be used for every day carry or as a sturdy field knife. Except for the blade, pivot, and Stop pin, all the parts on the knife are titanium! The ergonomic handle is specifically designed with comfort and confidence in of grip and has that signature “Harsey Look”. This particular knife is covered with several Runes and Staves to bring luck, good health, and healing to the owner. Hey it can't hurt!

Norse runes are an

lettering system or written language which was in everyday use long before the Roman alphabet which we use today was adopted into common use. It is said that the root word of rune is derived from the word “secret” in English and “whisper” in German. To many Icelandic people, the ancient runes are seen as a connection to the realm of the sacred. They represent the subtle patterns of connection which many believe underlie our lives, conveying messages from the infinite and allowing us to be in better harmony with the world around us.

The Icelandic magical staves are symbols found in books that tell of symbols of magic said to have power. They started to appear in the late middle-ages between the 15th and 19th centuries, but most date from the 18th century. They number in the hundreds. The staves were recorded in a textbook of magic, called a grimoire. Today they are worn as protective symbols to prevent getting lost or to give one power in battle!

Below are a few examples: 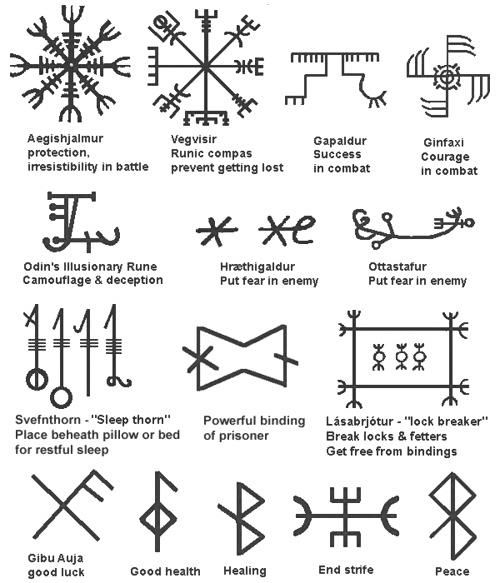