While attending the 2014 International BLADE Show in Atlanta, I had the opportunity to escape from my booth for a short time to do a little aisle surfing. As I walked from booth to booth, I saw much of the same as previous shows. As you can imagine, attending several knife shows a year you tend to run into the same people and see the same knives. As I walked past one particular booth I happened to notice a well-dressed jovial character who was speaking to a crowd of folks about the history of combat daggers. As a retired Special Forces soldier, I had always loved the classics like The Gerber MK II, the Fairbairn–Sykes, and The John EK Commando Daggers. The individual was preaching about American Craftsmanship and how important it was to preserve our heritage.

I looked up to see that I was standing in front of the Ka-Bar booth. My first thought was where did Ka-Bar find a guy who was so into history with a love for daggers to boot?

While fighting through the ever coagulating crowd at the booth, I heard this fellow mention the now out of business John Ek Commando Knife Company. As a lover of EK daggers, I knew this was a conversation I had to get in on. I introduced myself and explained that I owned a small knife company called Spartan Blades and had owned several EK Daggers when in the Army. As the conversation progressed I asked the guy his name and he replied “Nice to meet you, my name is John” “Nice to meet you John, How do you like working for Ka-Bar?” I replied. “Well, they treat me pretty good; I have been with them for a while” Assuming he probably worked for the company as a product rep or marketing guy, I asked him what he did at Ka-Bar. “Oh yea, I’m the President”.......Man did I feel like an idiot!

As the conversation progressed, John Stitt explained that he had just bought the old John Ek Commando knife Company and had plans to revive it. He explained that it was a decision of the heart more than business. He further explained that in many ways Ka-Bar was like a modern aircraft carrier. While great at its core tasks, it didn’t have the agility to make rapid changes. John felt that EK would give them the flexibility to try new and exciting things all while preserving the legacy of the company. (Pictured below an early dagger made by John Ek) 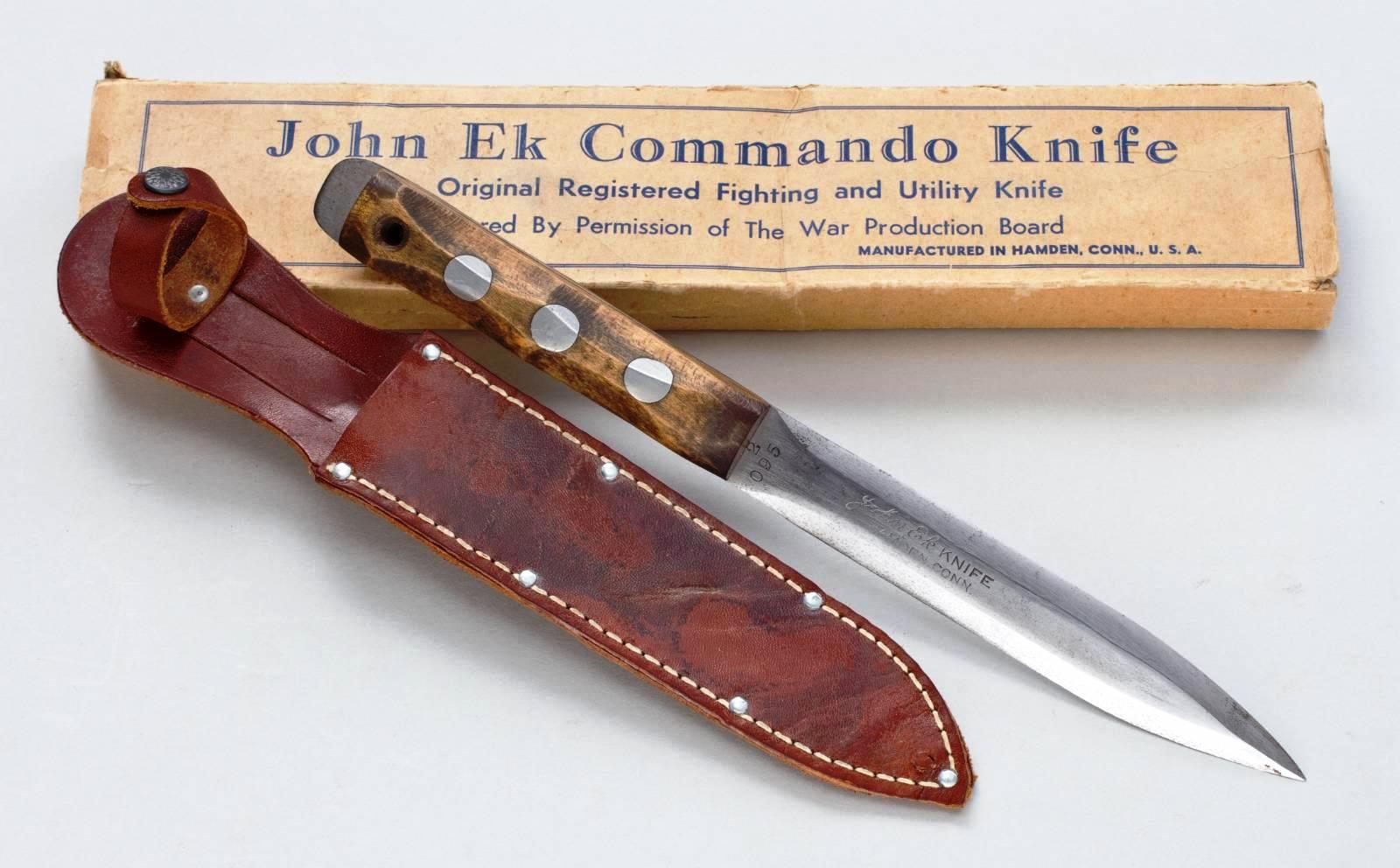 I couldn’t help but admire the fact that they might bring back the company and the blades I so admired as a young paratrooper. As the conversation progressed, the subject of daggers remained the topic of conversation.

I explained that Spartan Blades had just won The 2014 International BLADE Show “Knife Collaboration of the Year Award” along with Les George with our V-14 Dagger. I almost jokingly said “Hey if EK would like to do collaboration we would be all in!” Well, as you can imagine John gets this a lot, as do most knife companies. With limited time to talk, I rushed back to our both thinking that was the end of that.

Several weeks later I was pleasantly surprised to receive a call from John! He said, “I have been thinking about what you said at BLADE Show and would like to discuss further the idea of collaboration on an EK Combat Dagger.” I told him that I would have to discuss it with my partner Mark Carey but would put a proposal together along with some ideas. As you can imagine, we wanted to honor the legacy of John Ek and provide a quality knife to the troops that might use the knife. The one thing that weighed heavy on Mark and I was the storied history of EK. We wanted to make a quality dagger using only the best materials and processes but knew that it positively had to have the “EK Look”. The fact that there is a large group of hardcore EK collectors in world didn’t escape us either!

After submitting our proposal to the folks EK, we came to an agreement on what the collaboration should look like. Firstly, the knife had to be a reflection of the work John Ek did before his passing. In other words, people had to be able to look at the blade and say “oh, that is an EK” It would be a high quality knife using Crucible Particle Metal (CPM), double deep cryogenic heat treatment, pressure tempering, as well as PVD coating. Of course if we were going to go all out we might as well do a hollow grind and add a fuller in the middle. (See early concept drawing below) 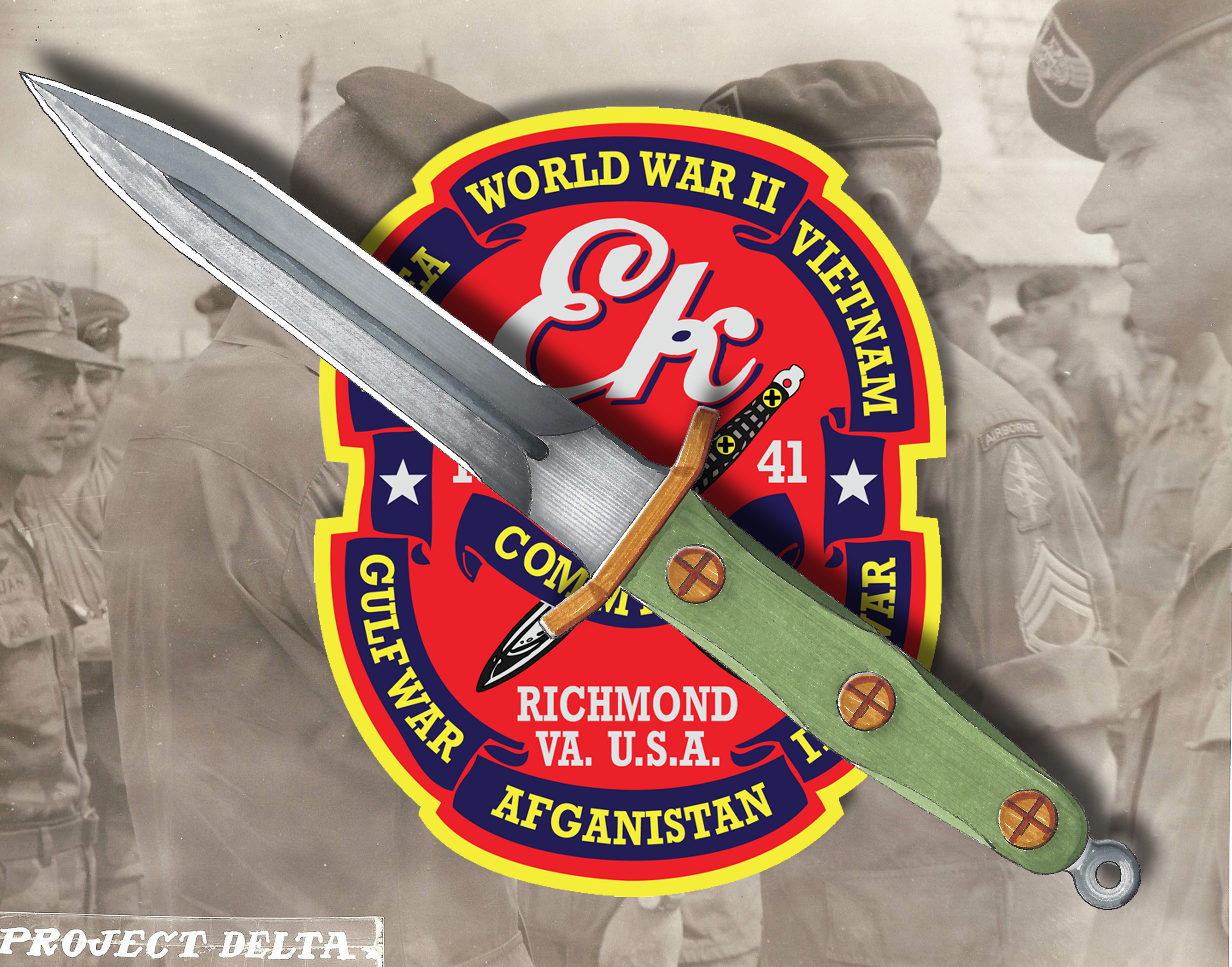 After some back and forth on the concept of the dagger it was decided that we would try a small run of Spartan/EK daggers. We agreed to do a run of 400 knives all serial numbered and of the same color. This would be our way of “Getting to know each other” It was agreed that each company would sell only 200 knives each. 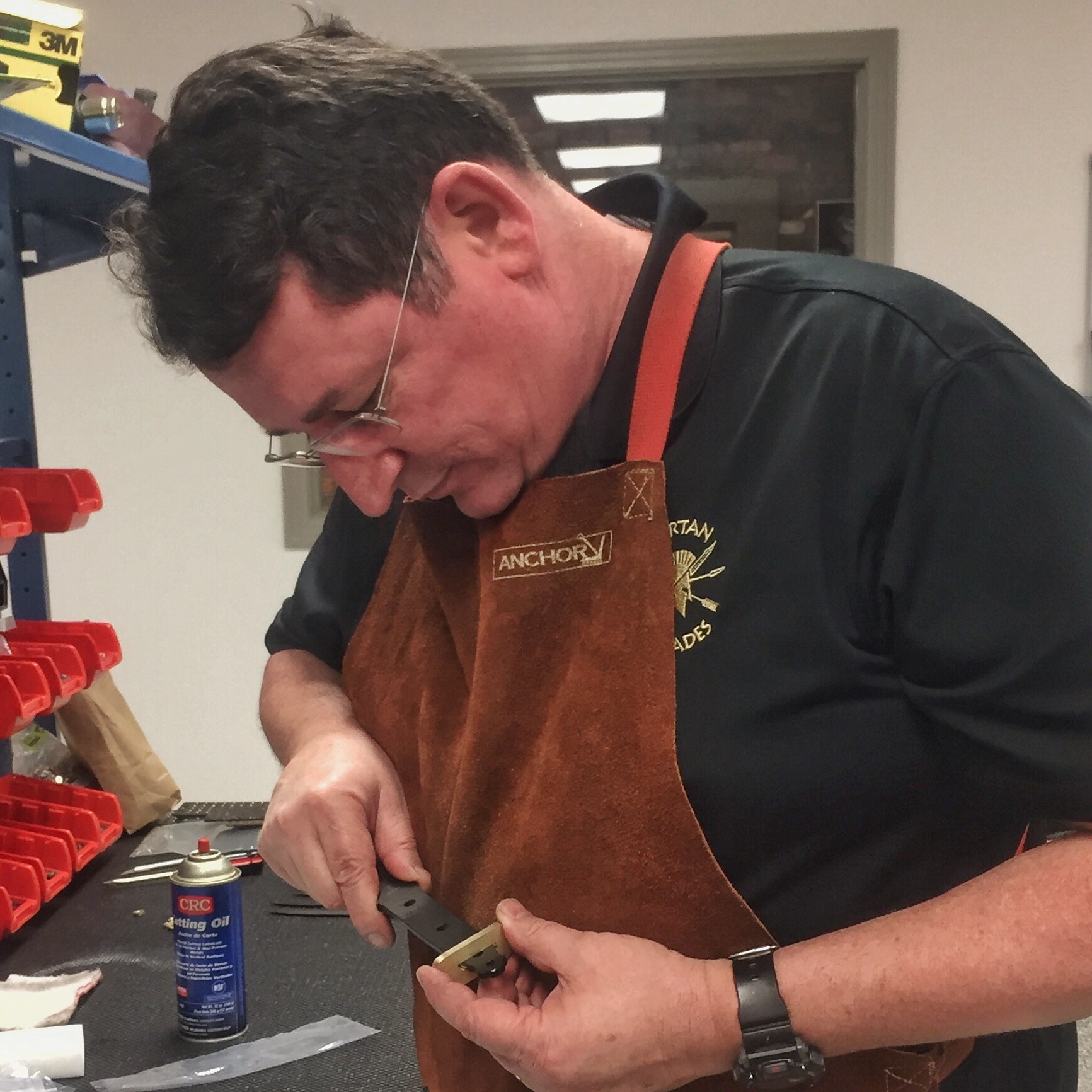 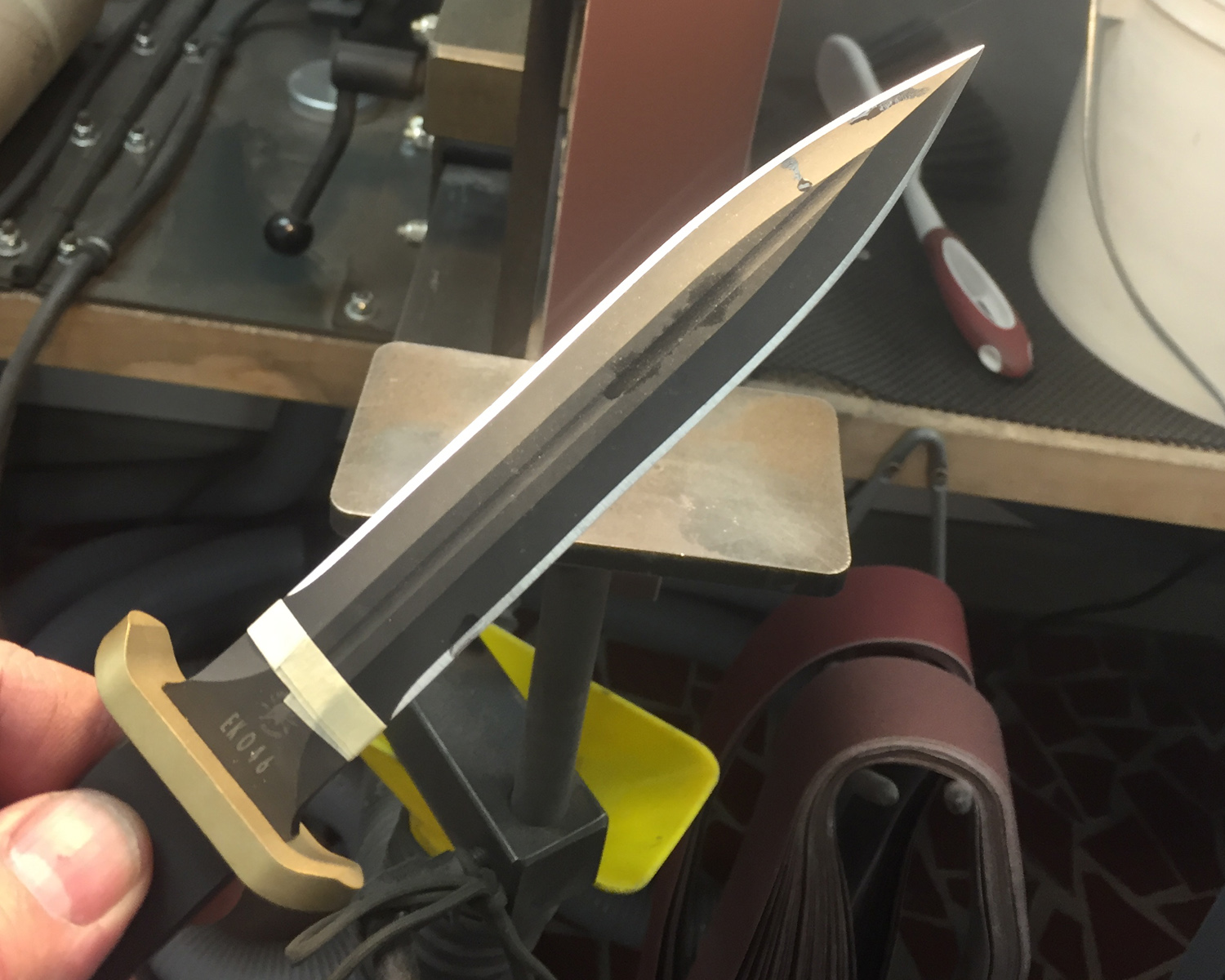 We quickly agreed that Spartan Blades would make the knives as the processes that we wanted to use were more readily available in North Carolina. Soon after agreeing to collaborate on the dagger, John Stitts called me and said “you aren’t going to believe what I just found!” He had just received some property from the old John Ek Company after the acquisition and had wanted to do a complete inventory. Upon opening a crate he found a box of brass guards the company made in 2000. Of course we thought it would be fantastic to use legacy guards on the new daggers! What better way of paying homage to the company of old! John also suggested making new brass screws just like the ones used in earlier EK models with the distinctive cross pattern on them and agreed to manufacture them for this model! 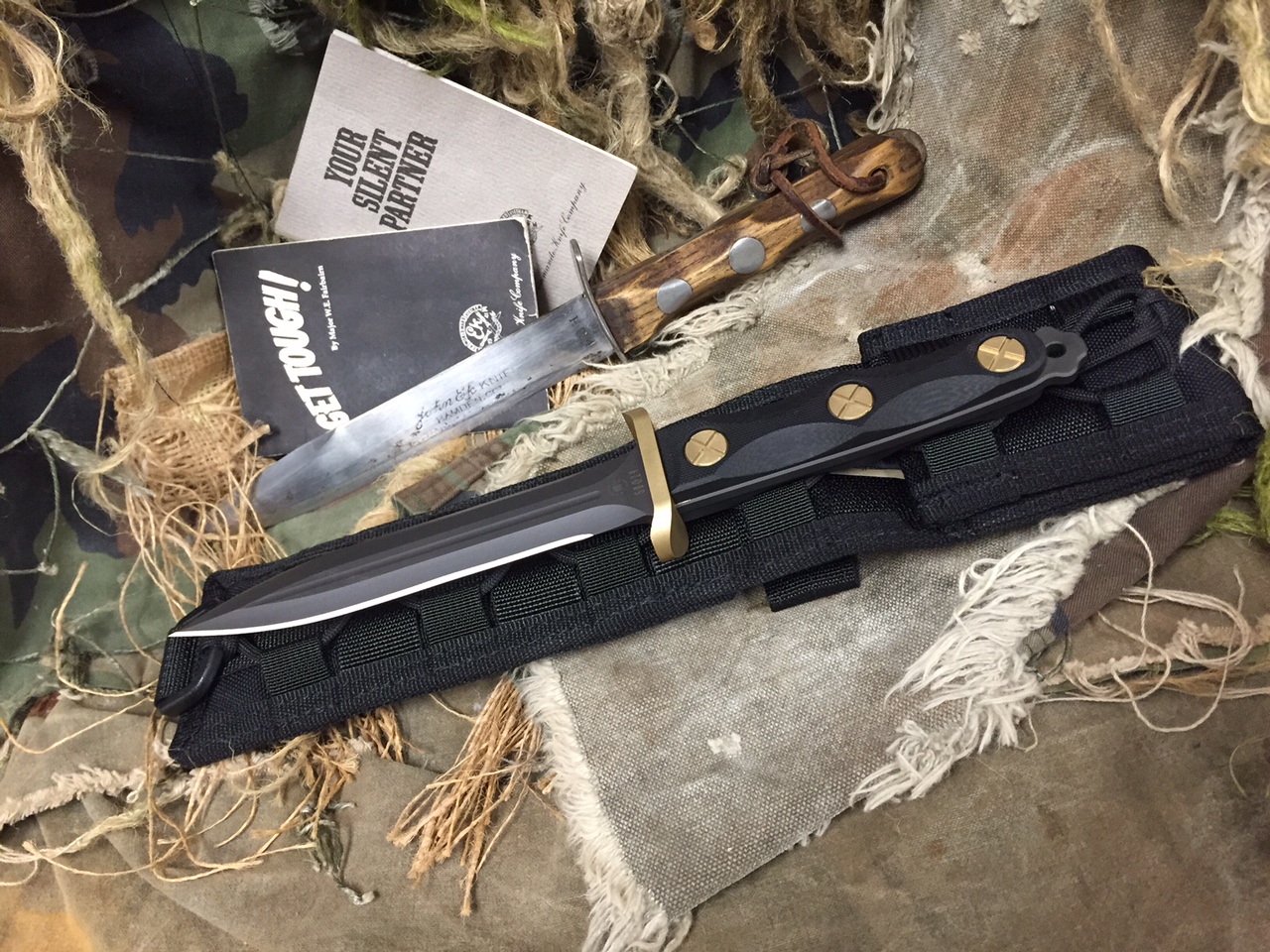 (The final version of the EK/Spartan Combat Dagger)

With the daggers complete we have agreed to release them on 15 April 2016!