Currently, I’m closing in fast on being a knife enthusiast for nearly three decades. That's probably longer than some of you have been alive! Through these years I’ve learned a lot of our hobby, about knife technology, about knife making, about the production knife industry, about custom knifemakers of all types, and so forth. One thing that I have also learned that is very important and one of the keys to getting as much out of this hobby as possible - is the knife community. By this, I mean the people who are engaged in this hobby. By this I mean the folks who make custom knives. The folks who make production knives. Folks who sell knives. And folks like you and me - those who are enthusiasts. At the end of the day we all share a common love of knife collecting. We “get it”.

However, the longer you are engaged in this hobby, the more and more you will see that it’s really not about knives themselves that keeps us actively engaged in this hobby. It’s the people. The “knife family” as it is called. People who possess an appreciation and love for man’s oldest tool. People who spend their hard earned money to purchase knives, and as you know, the upper end of the knife spectrum isn’t cheap! It takes a good chunk of our earnings to buy a knife. If you’re as unlucky as I am in the sense of having a simple taste - buy good stuff. Buying good stuff, definitely has a price tag! If you are into knives at any level - you are a full-fledged member of this family. How does one meet other family members, you might ask? The answer is easy. Just do what you love. Visit knife stores and begin hanging out regularly. Go to major knife shows such as the California Custom Knife Show, New York Knife Show, or the BLADE Show - you will meet a lot of fellow knife enthusiasts at any of these shows. They are just like you. They like good stuff, they have appreciation for the knife as a tool. They just love looking at knives and meeting other knife people!

Throughout the years of attending the BLADE Show, as well as being a member of knife discussion forums on the internet, I have been very fortunate enough to meet a lot of folks in this industry and a lot of those folks have become personal friends of mine through the years. To the point where you all still keep in touch, and technology these days makes it even easier whether it be through phone calls, texts, emails, or any one of the social media platforms. And when you do get in touch - knives sometimes are not even on the radar as far as conversation goes. You get to bond initially over knives but later as your friendships mature your conversations drift to ordinary everyday things like jobs, family members, pets, children, jobs, trials and tribulations of life in general, weddings, funerals, graduations, births of children, deaths of parents, new cars, new motorcycles, new spouses, job promotions, new jobs, other achievements, and so on.. You know, regular life stuff. You might even mention that you saw the new Spartan fixed blade in passing and your buddy is like “oh yeah I really want one of those but I can’t right now, my car needs new tires”...and then the conversation clutches and shifts into a new direction about another aspect of life. We might have the pleasure of physically bonding with these folks when we gather for big knife shows or you might even invite one over to your house if you hear he’s passing through town on business or pleasure. Yes. I have been there and done all this before! Knife people have a way of recognizing each other and it’s not so much what you say or don’t say, it’s a certain attitude and actions that back yourself up. You demonstrate that you are a solid individual. 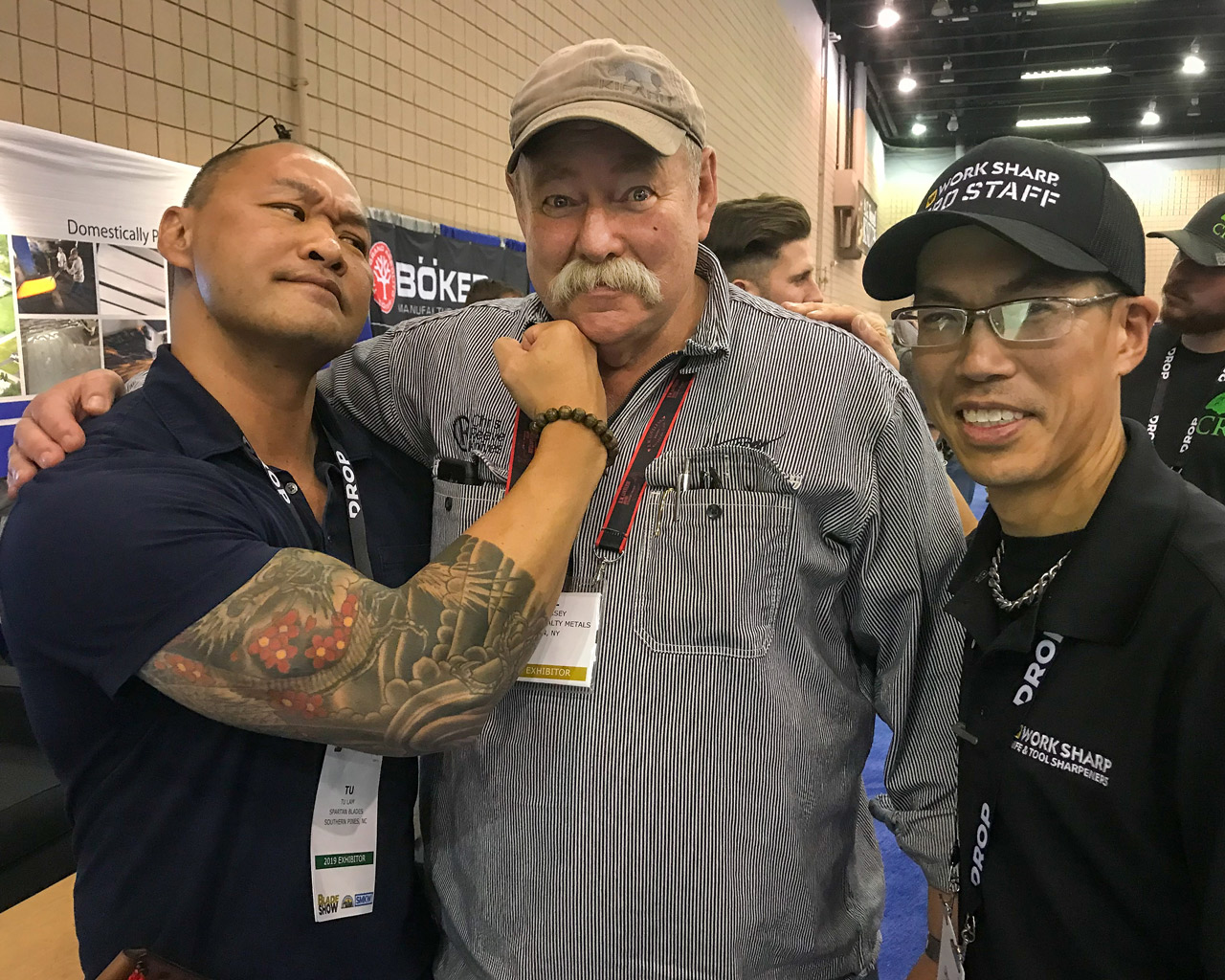 The author hanging out with Knife Designer William W. Harsey Jr and Tu Lam of Ronin Tactics at the international BLADE Show in Atlanta , Ga.

Another great way to meet other knife folks besides hanging out at shows or local knife stores, is to attend any open houses hosted by said knife stores, manufacturers, or custom makers. Custom makers sometimes may host hammer-in where folks can not only enjoy fellowship but they can also learn a bit about forging and knifemaking. Rick Hinderer of Rick Hinderer Knives hosts an annual open house in the Fall of the year over a weekend where he invites customers out to his property in Wooster, Ohio - same site as his production facility. Folks can have tours of the facility and also are other fun activities such as a shooting competition. Custom maker Jon Graham from Cleveland, TN hosts a “ROG & Roll Bash” (ROG stands for Razel Owners Group, dedicated to the knife of his own design - the Razel). They too have shop tours and Graham usually contracts a food truck to participate in the event to provide delicious food to attendees. Food and knives. Two things that draw folks together! Be on the lookout for opportunities like this that are easily accessible, they might not happen around where you live but if it’s within a few hours drive, then its worth it to make the commute to meet new friends and see some cool knives and gear.

Meeting people and eventually becoming good friends with them is a plus to this hobby. I know for sure that I wouldn’t get as much pleasure out of still being active in this hobby is it wasn’t for the people. If it was just about knives alone, I probably would have tired of it earlier and moved on to something else. But it’s the people that’s like the glue, that holds things together for you in this hobby. If you are like me and have made friends over knives, then you will know exactly what I am talking about and where I am coming from on this. If you are relatively new to this hobby, let me leave you with this piece of advice. While your passion for the hardware is burning bright, do not ignore the people in this industry. The people are what make this hobby so much fun, and making new friends as well as catching up with old ones every year at knife shows is something to look forward to. Knife folks always accept people no matter what. Young, old, male, female….knife folks are knife folks. Birds of a feather always flock together! Come for the knives and stay for the people. That is so true. Take my word, and try it for yourself. You stand to gain a lot more than just new knives.